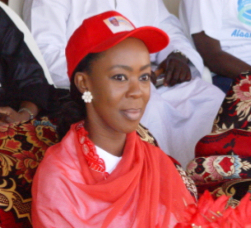 Amidst songs of praises, accolades, drums, and heart to heart prayers, for Dr. Bukola Saraki, the Executive Governor, Kwara State, his wife Mrs. Toyin Saraki, welcomed the American Medical Team to Kwara State for week-long free medical services. She made some passionate plea to the American Team and other Non-Profit Organizations to partnership with Kwara State Government in improving the health of underprivileged Children and their mothers.

In her opening remarks, to flag-off a week free medical services by the American Medical Team, in collaboration with Kwara State Government and the Well Being Foundation, she encouraged Kwarans to take advantage of the presence of the American Medical Team, present themselves for examination and treatment with effective drugs. She challenged individuals, and private organizations to support the government efforts in providing affordable health services to

“the less privileged who have no access to health care; the poor and terminally ill, who cannot afford Medicare care chiefly because of high costs of treatment.”

She echoed her efforts in improving the Children welfare through The Wellbeing Foundation (WBF); known as “Alaafia Tayo” a non-profit organization devoted to the welfare of Children in Kwara State. With her “long-standing philanthropic and volunteer experience”, and on the understanding of the specific needs of the people of Kwara State, Toyin began providing wide range of support and opportunities and making collaborative efforts between NGO’s, which led to the birth of The WellBeing Foundation.

The Kwara WellBeing Trust and Foundation (WBF) has offered some

“Financial Aid to those who have suffered one form of mishap or another; help to rebuild and renovate some Hospitals in Kwara State; Donate some equipments and providing drugs to notable hospitals in the State; and provide care and support to people living with HIV”.

The Foundation facilitates national and international emergency medical assistance for children whose parents do not have the means or access to lifesaving medical treatments.

Toyin Saraki has been involved in several Community programs since her husband became the Governor of Kwara State. Her inspiration stemmed from the words of Elsie Wiesel:

In effect Mrs. Toyin Saraki would like “to ensure that the people are better off than we met them” through the establishment of The Wellbeing Foundation, and Wellbeing Trust in 2003.

For some years before her husband was elected Governor of Kwara State, Mrs. Saraki had done charity work with The Lifestream Charity, which she established in about 1993. Lifestream however restricted itself to the treatment of children with heart deformities. According to her,

“Lifestream Charity was established for the provision of medical treatment of Nigerian children suffering from life threatening diseases and other conditions, particularly heart disease.”

One of the sites for the 2006 Medical Mission was the Children Specialist Hospital, Ilorin, popularly known as “Centre Igboro”. The Hospital was renovated by the WellBeing Foundation through Kwara Wellbeing Trust. The renovation gave a facelift to the Children Specialist Hospital, Ilorin, with the availability of Borehole for a source of clean pipe-borne water, fully equipped Children’s Ward, and Isolation Ward. Other areas renovated were the Doctor Consulting Rooms; Nurses Bay; provision of Mosquito Netting throughout the facility; Bathrooms in Maternity Unit; and Donation of an Ambulance to the Center. Toyin’s Foundation also donated equipments to the Neonatal Resuscitation units, and Infant Pulse Oximeters at the University of Ilorin Teaching Hospital. The contributions of the Wellbeing Foundation have challenged the American Medical Team to getting a dialysis machine for renal patients, in addition to others, on its next Medical Mission to Kwara State.

Furthermore, Toyin’s interests in Children have been demonstrated in many aspects of Nigerian Children life outside Kwara State. One of such areas was her visit to the Hospice Hearts of Gold Children’s Hospice, Surulere, Lagos in January 2004 where she was described as a woman with a Heart of Gold. At the Hospice she played with the children, presented educational toys, paid the salary of a full time social worker especially for two year old baby, Tobi, who suffers from Cerebral Palsy which affects the brain, lacks co-ordination, muscle and the general movement of the body.

Under normal circumstances, with Toyin Saraki’s background, born into the Ojora family of Lagos, cumulated with her marriage to Saraki family in Ilorin, someone would envisage that what would be domineering in Toyin would be that of conceit, contrariness, arrogance, or insolence. Pleasantly, she has demonstrated strong parental touches in her orientation toward human beings. She is a very warm, down to earth, friendly, humorous, cool-headed First-Lady. She is very humble and very passionate when it comes to underprivileged Nigerian Children and their Mothers. In her reaction to her ancestry and the status of her husband’s family,

Toyin Saraki is an Attorney, the only girl in the family of four children, who grew up among her three other brothers. That passionate instinct in her still prevails for Nigerian children, not growing up as a tomboy. That also help her not to be pushed around under any given circumstances, and been raised by a very strong mother. That might have influenced her activeness in the business world, and even working very hard to be a lawyer.

In response to Mrs. Toyin Saraki’s request, the leader of the Medical Team, Dr. Femi Ajayi, pledged to get with the Team members for the needed equipments for the State Specialist Hospital, Alagbado, Ilorin, otherwise known as Sobi Specialist Hospital, and Children Specialist Hospital, Ilorin. In addition, he promised to solicit for Medical Books for the School of Nursing and Midwifery, as soon as the Team gets back to the United States of America. These could be shipped to the State in a record time, before its next trip to Kwara State. The team promised to find ways of getting the supplies across to the State as part of its support for Saraki’s administration on the Children Health care services.

In addition to the Medical services, seminars were also organized for the School of Nursing and Midwifery on HIV/AIDS and women. One of the Health Educators on the Medical Mission trained Student Nurses on the treatment of HIV/AIDS. The Team also studied the peculiar health needs of the State, while necessary recommendations for assistance would be made when they returned to their respective destinations. As of the time of writing this piece, Medical Books and equipments are being collected pending the shipments to Kwara State.

During the first visit of the American based Medical Team in 2005, a handicap patient at Sobi Specialist Hospital was promised a Wheel Chair. The wheelchair was donated to the patient by the Medical Team to Saidi Alate. Mrs. Toyin Saraki assisted the Team leader, Dr. Femi Ajayi to make the presentation.

The American based Medical Mission to Kwara State made its second visit to Kwara State. The first was in 2005 and measuring the needs and the Governments willingness in helping the people, the 2006 Medical Mission made a return to the State spearheaded by the State Government. Such Medical Mission is one of the positive outcomes of Dr. Saraki administration’s “efforts at creating cross linkages between Kwara State and the world in all fields of endeavor”. The realization is that there is no Island in any development and has to reach out to those that could provide such helping hand in the development.

The Ministry of Health threw its weight for successes of the 2006 Medical Mission to Kwara State. Under the guardianship of Dr. Femi Ogunsola, Kwara Health Commissioner, and the strong able woman of the Ministry, Hajia Isiaka, the Permanent Secretary, whom every one refers to as “Mother of Health”, the 2006 Medical Mission to Kwara State was a huge success. Dr. Femi Ogunsola described the program as a testimony of the administration’s commitment to partner with health care providers and workers anywhere to ensure that it achieves its aim of bequeathing a lasting legacy in the health sector.

Over 4, 500 patients received free medical services during the one-week Medical Mission in Kwara State. Each of the patients went home with some medications in addition to some vitamin supplements, given to every patient that came for the Medical Mission.

In addition to the free medical services, surgeries (Operations) were successfully performed on over 57 patients. The patients’ ages, ranged from 18 – 70 years; about 60% of the patients were between 18 and 45, while 30% were between 45 and 60, and the rest were over 60 years of age. Surgeries were mainly hernia, Hermorrhophy, excision of Lipoma, evacuation, repairs of hernia. While some other general illnesses included arthritis, nasal congestions, foot drop, impetigo, Anemia, Nasal congestion, boil, rashes, and Ear discharges. Quite a number of patients were treated for malaria, coughing, diarrhea, meningitis, and pneumonia.

At the Pediatric wards, the good news from that section indicated that, most of the children seen were up to date with their immunizations. That is a good effort of the State Ministry of Health. At least over 500 children were seen during the Medical Mission in the State.

The Medical Mission is a way of giving back to the community. Such Medical Mission is a needed intervention and caring for the people of the State. The one-week free medical services, arranged for the people of the State, could otherwise been turned down by the State Government. When a State Government, under a visionary leader, like Dr. Bukola Saraki, putting all politics aside, decides to arrange for such Medical Mission, the citizens should count their blessings. The beneficiaries are those people that have little or no means of getting medical services from their Medical Doctors. Such services are Medical Consultation, free drugs, and free major surgical procedures, prolong the life of the patients and make them live some quality life. This is a challenge to every human being, not only in Nigeria, to do something for the in-coming generation, to give better life to humanity.